What Does Technology “Convergence” Mean for Business Communications? 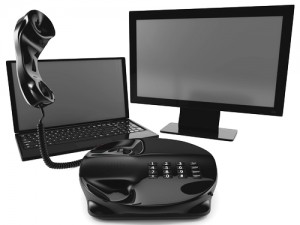 One thing the field of technology excels at is generating new terminology and trendy buzzwords. The tech world changes and evolves so rapidly that it continually bombards us with unfamiliar new terms and acronyms. Quite a few of these frankly lack much real significance to everyday users, but “convergence” is a word that denotes a very real and important technological concept.  Convergence will affect every kind of tech consumer and bring change to many business processes, including telecom management.

Actually, there are two important kinds of convergence in progress – the coming together of fixed and mobile telecom services, and the coming together of telecommunications and IT technologies. Both kinds of convergence are bringing fundamental and permanent change to the way both individuals and organizations purchase and use communications services. This post will deal with telecom-IT convergence.

At one time, your telephone was your telephone and your computer was your computer; there was telecom and there was information technology (IT), and they were two different and separate things. But as the two become increasingly integrated and forms of electronic communication between people proliferate, it has become popular to speak of information and communications technology, or ICT.

Of course, this convergence was inevitable. Phone calls were already being carried as digital signals, at least over some parts of the telephone network, way back in the early 1960s. Once other digital networks were created – such as the internet and wide-area networks (WANs) – it was logical that some voice traffic would migrate there, especially if there were telecom savings to be had. Voice over internet protocol (VoIP), the technology that makes services like Skype and Vonage possible, simply transmits digitized voice signals over the internet rather than via phone company cables and wires.

In practice, voice calls are just another form of data or information, and the idea of a separate network that exists almost solely to carry voice communication (i.e., the old phone system) is obsolete. Telephone service providers don’t have much incentive to spend a fortune to maintain an old network cobbled together over the last century and now made redundant by newer technologies. Indeed, in comments it submitted to the Federal Communications Commission two years ago, AT&T said that the old wireline phone system – the venerable “public switched telephone network” (PSTN) – needs to be scrapped.

It seems clear that old-fashioned wireline phone service won’t even be a choice for business telecom in the not-too-distant future. Residential customers have been abandoning wireline service at an astonishing rate, meaning that fewer people are paying to maintain the old wireline infrastructure.  At some point revenues won’t be adequate to maintain the PSTN. Meanwhile, businesses turn to VoIP services that support feature-rich phones and systems that integrate telephony with voicemail, e-mail, text messaging, instant messaging, videoconferencing and more.  All these forms of communication rely on digital networks and IT infrastructure, demonstrating convergence and the reason for the term ICT.

As an experienced telecommunications management firm, Telanalysis has been helping clients find the most efficient telecom technologies and services since 1985. Telanalysis can find significant savings for your company or organization by performing a no-risk phone bill audit or IT bill audit that will identify past billing errors and suggest new ways to save going forward. Telanalysis can also handle your enterprises’ telecom contract negotiations and perform expert telecom invoice management services. Call Telanalysis today for a free consultation at 866-300-6999.

This entry was posted in Telecom Management. Bookmark the permalink.