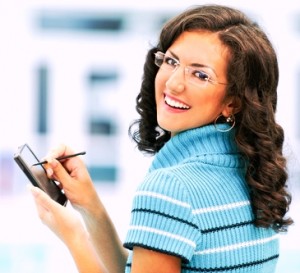 The amount of data consumed over mobile networks worldwide more than doubled every year for each of the last four years, according to a February report from the IT and telecom consulting company Cisco. Several other studies and forecasts of mobile data usage indicate that this phenomenal rate of growth shows no signs of slowing down any time this decade.

To get some idea of the scale of the data load already passing over mobile networks, consider the Cisco report’s comparison of current mobile data traffic to internet traffic a decade ago. According to the report, the amount of data that moved monthly over mobile networks in 2011 was eight times the total data that passed over the entire internet each month in 2000.

Quantifying the enormous amount of data being exchanged over mobile networks today renders the familiar terms megabyte, gigabyte and even terabyte (one trillion bytes) useless. Instead, the monthly volume of mobile traffic currently crisscrossing the planet must be measured by the petabyte (PB), which is equal to one quadrillion bytes. Cisco says that 2011 mobile data traffic averaged just under 600 petabytes per month. But the amount of data usage is growing so rapidly that by 2016, just a few short years away, monthly global mobile data traffic will exceed 10 exabytes (10 quintillion bytes), for an approximately 17-fold increase in just five years.

Nokia Siemens Networks showed similar growth projections in an infographic it released last September, which estimated that data traffic worldwide will total a little over 6 exabytes per month by 2015, representing a 2600 percent increase over 2010.  By 2020, according to Nokia, the average mobile data user could be consuming one gigabyte (GB) of data per day, an increase from 2011 of about 6700 percent.

Under many of the data plans currently available in the United States, 1 GB of data is half of a subscriber’s monthly allotment. Clearly, data pricing structures will have to change as more and more people using more and more devices make routine use of data-intensive applications like video streaming. Exactly how mobile network operators will maximize their revenues from the ongoing explosion in data traffic is unclear, perhaps even to the operators themselves.

The last few years have already seen the disappearance of unlimited data plans from the offerings of all but one of the major U.S. wireless carriers, in favored of tiered data pricing. Over the next few years, mobile telecom companies are likely to test out more new pricing schemes for data consumption. Telecom consultants have anticipated the eventual emergence of data billing practices such as charging customers by the app or for each service used, or charging extra for tethering.

However, because they’re worried about remaining competitive, operators are understandably reluctant to be the first to implement any novel data pricing scheme. A survey by Connected Planet of more than 300 mobile operators revealed that most prefer usage-based billing, and that a decided majority of them expect to make some kind of change to their data billing plans this year. But a large number of them also indicated that market forces and customer perceptions would probably prevent them from using the exact billing plan that they would most prefer to adopt.

Few aspects of running an organization are changing as rapidly as the market for data, telecom and IT services. More than ever, telecommunications management requires an expert with up-to-the-minute knowledge of the industry to make the most cost-effective decisions. Let Telanalysis be the telecom billing expert in your corner. Call Telanalysis today at 866-300-6999 to arrange for a free consultation and to find out about getting a money-saving telecom audit for your organization at no risk.